Receptors (specific to a particular hormone)

Have LOCAL effects, but are regulatory chemicals carried in the blood, so they are sometimes called “tissue hormones”

Membrane-bound receptors (face out of the target cell)

Amino acid derivative hormones, such as thyroid hormone, may have intracellular receptors as do steroid hormones

Hormones may work together to regulate target cells

Even though our course focuses on one or two main actions for each hormone, each hormone may have hundreds of secondary effects

Important for understanding the complexity of endocrine function

Not all hormones find their targets

Basal secretion (may be periodic)

Cyclic secretion of hormones during female reproductive cycle.
Values plotted from a human study.
Click for a larger image.

Neurons that release their transmitters directly into the blood (rather than across a gap to another neuron), so the transmitters then act as hormones

Part of brain on inferior side, just in front of (and above) the brain stem

Part of it is nervous tissue, part is neuroendocrine tissue 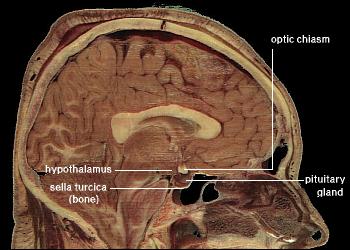 Location of hypothalamus and pituitary

Location — below larynx, wrapped around trachea

Please refer to the tables in the Anatomy & Physiology

textbook for a summary of these and other additional hormones of the human body.