Nucleotide is the subunit, made of three components:

Maurice Wilkins and Rosalind Franklin have also been given credit for participating in the discovery of this vitally important molecule’s structure and essential function. (Wilkins shared the 1962 Nobel Prize in Medicine/Physiology with Watson & Crick)

Researchers continue to unravel the many complexities and mysteries of what Watson called, “the most golden of all molecules.”

Genetish is a made-up word introduced by author Matt Ridley

to describe the coding used by cells in DNA/RNA

Codon table. This table is a type of “phrasebook” for the language of “genetish” —-showing the meaning of different possible codons.

Click here to see Ben Fry’s easier-to-read version of this classic table!
Ben constructed this as a student at MIT.
This version is similar to that found in our Anatomy & Physiology textbook (except that the textbook version is adapted to HUMAN genetish).

Master code for proteins made by the cell

In humans, temporary “working copies” of specific genes from DNA are in the form of RNA (review Cell Structure & Function)

Optional: Click here for another helpful outline Making Proteins from the Pre-A&P course.

Facilitated by enzymes (isn’t everything?)

mRNA is a “transcribed” copy of one gene in DNA

DNA unzips at one gene, and other side “fills in” with RNA nucleotides with bases that complement the exposed bases of the DNA strand 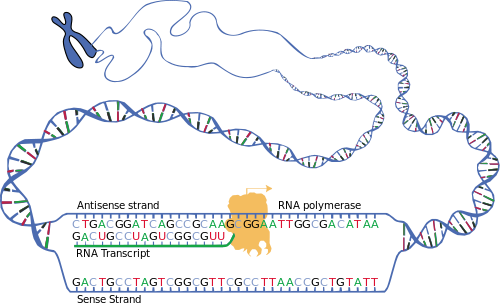 Other forms of RNA (tRNA, mRNA) produced in a similar manner 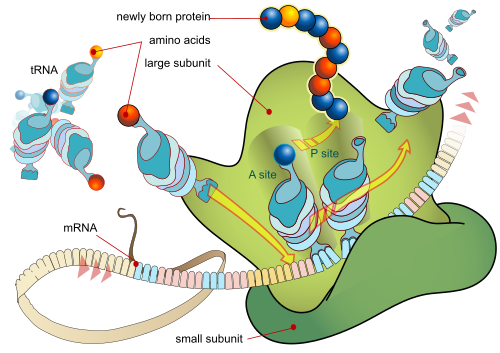 Translation.
Each tRNA (blue) brings a specific amino acid to ribosome (green) and links to the complementary codon on mRNA strand. As amino acids link together with peptide bonds, a polypeptide grows in length. 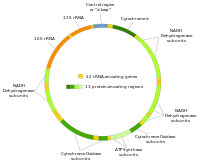 Mitochondrial DNA (mtDNA). This ringlike strand of DNA, similar to that seen in bacteria, contains genes that code for enzymes needed in mitochondrial function. Click on image to see larger source image, which is labeled with gene locations.

Genomic cartography is the study of methods to map out the genome of humans an other species in a way that makes the information easy to interpret and therefore more useful to everyone. Click here for an optional discussion from genomic cartographer Ben Fry.

If you think about it, DNA is kind of like a cookbook, with genes being the individual recipes used to “cook up” the proteins of the body!