The concept was first articulated by [Frenchman] Claude Bernard in 1860s

“I think I was the first to urge the belief that animals have really two environments: a milieu extérieur in which the organism is situated, and a milieu intérieur in which the tissue elements live. The living organism does not really exist in the milieu extérieur (the atmosphere it breathes, salt or fresh water if that is the element) but in the liquid milieu intérieur formed by the circulating organic liquid which surrounds and bathes all the tissue elements; this is the lymph or plasma, the liquid part of the blood which, in the higher animals, is diffused through the tissues and forms the ensemble of the intercellular liquids and is the basis of all local nutrition and the common factor of all elementary exchanges. A complex organism should be looked upon as an assemblage of simple organisms which are the anatomical elements that live in the liquid milieu intérieur.” — Claude Bernard

“The coordinated physiological processes which maintain most of the steady states in the organism are so complex and so peculiar to living beings–involving, as they may, the brain and nerves, the heart, lungs, kidneys and spleen, all working cooperatively—that I have suggested a special designation for these states, homeostasis. The word does not imply something set and immobile, a stagnation. It means a condition—a condition which may vary, but which is relatively constant.” —Walter B. Cannon

Fish are like the cells of the [multicellular] body

Components of an automatic control system

Changes in temp are detected by thermometer, which feeds info about the actual temp back to thermostat, which has been previously set to ideal (setpoint) value; thermostat compares actual value to setpoint value and sends signal to furnace, which fires up and changes the internal temp back toward setpoint (furnace will shut down when thermostat determines actual temp is now higher than setpoint temp) 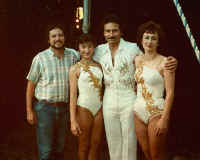 Kevin (left) with The Flying Wallendas (Alida, Tino, Olinka) when they all performed on the same program in Circus Flora at Faust Park in 1987.
Click image to enlarge it