Hypodermis — loose fibrous tissue under skin (hypodermis is NOT part of skin, but where else can we discuss it?) 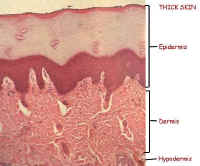 Composed of different strata, the outermost of which are comprised of dead cells

Listed here from deep to superficial)

Two layers of the dermis:

NOT part of skin proper

Recommended link: Skin Histology This is a brief set of microscopic images to help you understand the structure of the skin

Hint: You will be tested on the correct anatomical order of any/all layers of the skin and associated structures (deep —> superficial AND superficial —> deep) 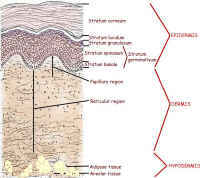 Hair shaft (visible part) and root (not seen; in follicle)

Nail bed is skin under the nail

Microbiome: interacting populations of microorganisms living on the skin

Human skin color varies widely, mostly from the presence of different types and amounts of melanin in the epidermis, as seen in these three photos of young girls.

Left are Maasai girls from Tanzania, Africa.
Middle are villagers from the upper Amazon, Peru.
Right is my daughter Aileen (Euro-american) in 1994.
Click the image to enlarge it

Stan Jones, the Libertarian candidate in Montana for the U.S. Senate in 2002, turned blue from taking home-made colloidal silver solution. He took the solution as a preventive antibacterial agent. It caused argyria, which caused silver crystals to form in his skin which, along with stimulated melanin production, made Mr. Jones’s skin look gray-blue.

Interested in skin? Check out Skin: A Natural History

Thermoregulatory functions of the skin

Blood in the dermis is like the fluid in a radiator, bringing heat from other parts of the body

Warm air rises (because it is less dense than cool air), creating a convection current that draws cooler air in behind it

The African elephant (above) provides an extreme example of the skin’s thermoregulatory function. The front of the animal’s ear (left photo) shows the ear’s great size relative to its head and body—but very thick skin. Notice the lighter areas—these are highly keratinized patches. The back of the ear reveals very large vessels near the surface of the very thin skin (no light patches). The elephant can regulate heat loss through its ears by exposing or not exposing the back of the ear.

However, in 1992, P.A. Mackowiak’s research team used modern equipment and techniques and found that the human body temperature (oral) averages about 98.2 °F (36.8 °C). Here are their overall results:

What does this tell us? That body temperature, and other physiological variables, are not the same for everyone and even vary within an individual. This variability is NORMAL.

NOTE: Even though Wunderlich’s average body temperature has been revised to a slightly different number by Mackowiak’s more recent work, we usually still use the older numbers for the sake of discussion—a “ball park” number—neither average applies to any particular individual.