9:1 ratio of glia to neurons on average in entire nervous system (ratio may be higher in more complex processing centers; estimates vary widely)

Overview of neurons and their role in the nervous system

Capable of an “impulse” or voltage fluctuation

Extensions in general are sometimes called nerve fibers or neurites 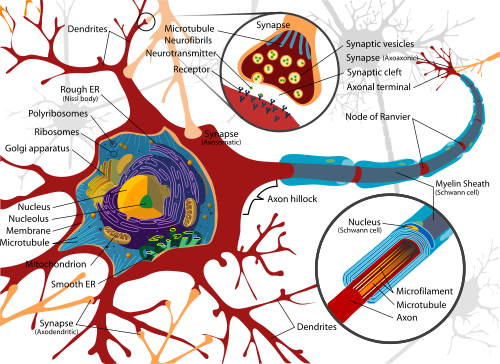 Hint: Print several copies of the figure at

and have them ready in class to take notes

Several gated channels are at play here, too

There’s more Na+ outside the cell than K+ inside, thus there is an imbalance of too many positive ions on the outside

Membrane is polarized—that is, it has a negative pole and positive pole

If local potential reaches axon, and is a depolarization large enough to reach the threshold potential (-59 mV), then voltage-gated channels in the axon will open —causing an action potential

Voltage-gated Na+ channels open first, and Na+ rushes in to depolarize the membrane to +30 mV

Then voltage-gated K+ channels open (they’re slow, like your A & P prof, OK?) and K+ rushes out to repolarize the membrane back toward RMP

Peak of +30 mV triggers the next section of axon to open its voltage-gated channels, and the process repeats —and keeps repeating all the way to the terminals at end of axon

Parts of a synapse

Transmission must be “turned off” or it will continue forever

Other concepts of synaptic transmission

Retrograde signaling — neurons can also send neurtransmitters “backwards” from the postsynaptic cell to the presynaptic cell, further enhancing communication within a neural network

Proposed mechanisms of memory ALL involve changes at synapses