Macromolecule: giant molecules (many atoms, not just a few)

Polymer: macromolecule made up of many smaller molecules called “monomers”

The major biological molecules we discuss in introductory human biology are:

Saccharides (C6H12O6)—sugar groups that make up many carbohydrates

Triglycerides: three fatty acid “tails” and one glycerol holding them together 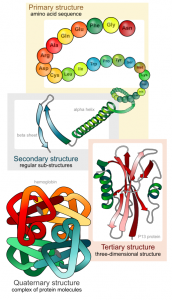 Proteins have multiple levels of complexity. Click to enlarge.

Simplified animation of the allosteric effect, in which shape affects function of enzymes