Blood “connects” the various regions of the internal fluid environment by providing a flowing, circulating stream of liquid that transports, protects, and regulates

Anatomy of the Cardiovascular System

Anatomy of the Heart

Functional anatomy of the heart

Chambers of the heart

Valves of the heart

and print out the sketch from Leonardo da Vinci’s notebook showing SL valves. I have added labels to clarify each view.

Watch the valves in action! Click on the the icon

to see a video of a transesophageal echocardiogram (TEE) that shows the valves working. A TEE is a sonogram of the heart taken from inside the esophagus, which runs right behind the heart.

Skeleton of the heart

Pathway of blood through heart and “circulatory routes”

Systemic route is longer and more extensive than pulmonary route

Blood goes through pulmonary route, then systemic, then pulmonary, and so on

Route through heart and circulatory routes:

Note: Vessels are named “artery” or “vein” based on the direction in which they conduct blood —NOT whether they contain oxygenated or deoxygenated blood

Physiology of the Cardiovascular System

Heart acts as a pump

Electrical conducting system of the heart 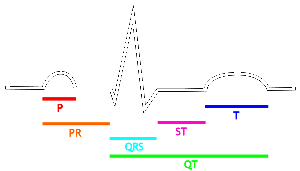 Use of a sphygmomanometer, which is simply a pressure gauge calibrated to mm Hg (how much a column of mercury [liquid metal] will rise in a tube as a result of a certain amount of pressure)

Reported as max/min or sys/dias, for example 120/80 or “one-twenty over eighty”

Primary principle of circulation — blood flows down a pressure gradient